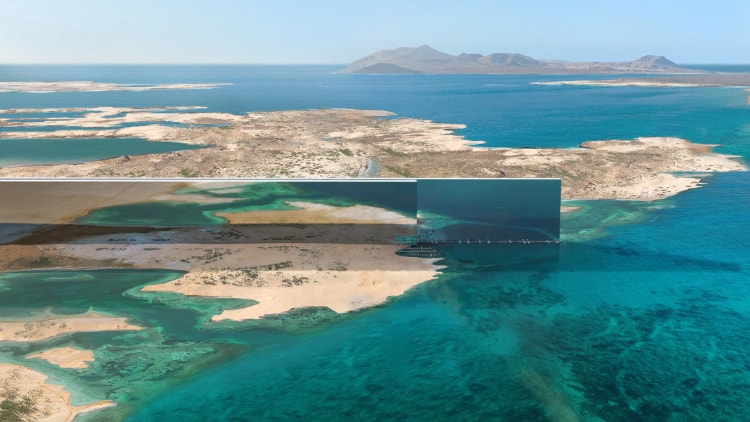 Imagine a visually stunning sci-fi city of the future with robots, flying taxis, and vertical gardening, running entirely on renewable energy. This is Saudi Arabia’s vision of a futuristic megacity, Neom, along the Red Sea coast in Tabuk, northwestern Saudi Arabia. With a budget of $500 billion, now updated to $1 trillion, the idea of Neom was announced by Saudi crown prince Mohammed bin Salman in 2017, at the Future Investment Initiative conference in Riyadh, under Saudi Arabia’s Vision 2030.

So, what are the reasons behind this ambitious project, and what would this city look like?

Why is Saudi Arabia building Neom?

The name “Neom” comes from two words – “neo,” meaning “new” in Greek, and the letter “m” is an abbreviation of the Arabic word “mustaqbal,” which means “future.” Neom is the prince’s dream of a New Future that would house 9 million people by 2045 and help Saudi Arabia’s ambitious population growth goals, as well as make the kingdom a global economic powerhouse. Neom’s most important mission is to diversify the country’s oil-dependent economy.

The city promotes an alternative way of living, focusing on innovation, technology, infrastructure, education, tourism, and research. It aims to combat the pressing global challenges faced by urban living and highlights man’s relationship with his environment by preserving 95% of the nature around the city. Neom would run on 100% renewable energy with zero emissions and a negative carbon footprint.

The industrial center of Neom will contribute $48 billion to the country’s GDP and create around 380,000 jobs, according to the prince’s vision. He also said that Saudi Arabia aimed for its stock exchange to be among the three biggest in the world.

Saudi Arabia’s sovereign wealth fund will own the city, but it also plans to become a source of foreign direct investments. Neom will operate independently from the country’s existing government and will have its judicial system, taxes, and laws. All in all, Neom will embrace a new economic era in Saudi Arabia.

The project’s website proudly says that the city would herald a bright dawn, a promising future, and a rich life in a land built by man for the sake of all humanity. Appearance-wise, this smart city would cover an area of 10,200 square miles and extend for 110 miles along the Red Sea coast. “The Line” is the mega-city central to Neom, but it also has a series of other developments. These are called Neom Bay (which would include the airport), Aqaba Region, Oxagon (the industrial city), and Trojena.

Trojena will be a year-round destination with mountain-quality dry air, a state-of-the-art ski slope, mountain biking, water sports, wellness facilities, and an interactive nature reserve. Apart from these, there are plans to build a resort called the Vault, to be built at the foot of the mountain.

The Line will have “zero gravity urbanism” based on the concept of layers. The city will function vertically, and the residents can move seamlessly in three directions (up, down, and across). There will be no roads, no cars, and just a high-speed transit train taking you from one end to another in just 20 minutes. The entire city will be inside two skyscrapers taller than the Eiffel Tower, made of reflective glass. It would be run by artificial intelligence designed to coexist with nature.

According to the planners, each area will run solely on renewable energy, be sustainably connected, and be surrounded by nature that will be re-greened and rewilded.

The Line, One end to another end in just 20 mins. Image courtesy: NEOM

“The Line” is one of the largest projects in Neom and the most marketed. The monolithic city will stand between an elaborate façade of reflective glass. This “landscraper,” made of two parallel structures, will stretch from the Gulf of Aqaba and, in the process, divide a mountain range that stretches along the coast.

The city will be on three different levels, with one giant structure instead of multiple buildings. It will be 110 miles long, 660 feet wide, and almost 500 meters in height. There will be no roads or cars, only walkways and gardens.  The residents will have access to all their daily needs within a five minutes walk in the neighborhood. A high-speed railway will operate along “The Line” for the residents, making it possible to travel end to end in 20 minutes. Vertical farming with vegetables that will be independently harvested and assembled will provide for their sustenance.

Drone footage of The Line, released by the OT Sky Drone company, has revealed that construction has already started, with excavators seen digging a wide trench in the desert.

Why are scientists and architects skeptical of Neom?

Since announced, scientists and economists have raised questions about the feasibility of building such a magnanimous project. Will the cost be worth it? Its environmental credentials are also in question. The two giant glass mirrors of “The Line” will reflect the sunlight and create two really hot heat zones, literally frying everything around them. So, what about the birds flying into it? Not a harmonious idea if one wants to protect nature!

The city’s design boasts of a super-fast train that would take the residents from one end to another in 20 minutes. But how does the design of a long single line help cut down commute time? Why not build a circle, square, or rectangle? To make the entire journey in 20 minutes, the train would have to run at an improbable speed of 326 miles/hour. Right now, the fastest train in the world is the Shanghai Maglev which runs at 285 miles/hour. So, this design creates issues that could have been easily avoidable and less expensive.

And these problems are just the tip of the iceberg. People have also cited examples of King Abdullah Economic City, launched a decade ago as part of a $30 billion project to build six cities to diversify the economy. But today, only one has materialized, and it is not only losing the battle to attract foreign investment but has only 7,000 inhabitants to date, which is far from the government’s goal of two million by 2035.

The dream megacity of Nerom has a hidden dark side.

The family members were detained in 2020 for opposing eviction to make way for #Neom.

We condemn the sentences and call for their release. #SaudiArabia pic.twitter.com/NQ5UZOlSCK

This incredible vision of a zero-emission, self-sustainable green mega city is not without its share of controversies. Based on reports by independent human rights organizations, the residents of Saudi Arabia have protested against the development of Neom because it would require the eviction of almost 20,000 residents in the area, including the Bedouin Tribe members.

A newspaper report based on a human rights group in the U.K states that Saudi Arabia has quietly sentenced three people to death when they refused to vacate their homes for the project – Shadli, Attaullah, and Ibrahim al-Howeitat who belonged to the Howeitat tribe in the northern Tabuk province. A tribesman, also the brother of one of the men sentenced, has been allegedly shot dead by Saudi special forces after he criticized the eviction drives on social media.

This has raised humanitarian concerns and reminded the world of how the Kingdom of Saudi Arabia has always dealt with opposition. Evicting the tribes who have occupied the region for hundreds of years by offering them half-hearted compensation and silencing anyone who raises a voice of protest is just a microcosm of all that is wrong with this dream!

Did you know that Saudi Arabia has won a bid to host the Asian Winter Games in Neom, a city that does not yet exist?