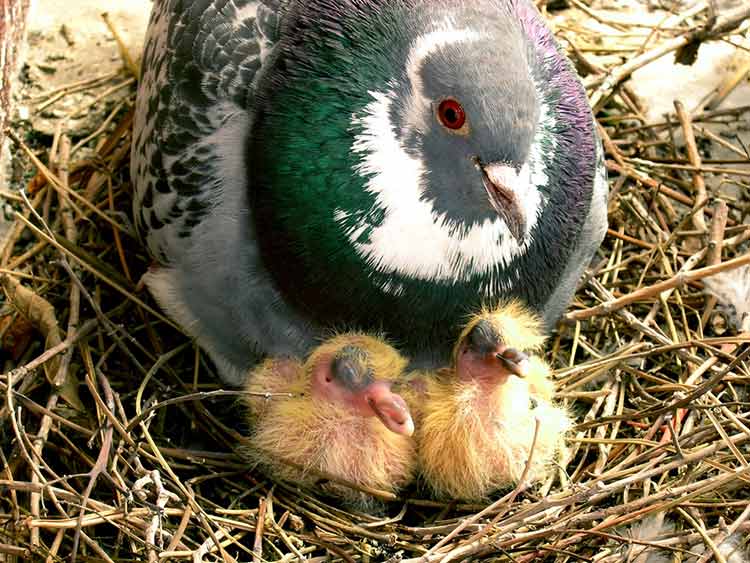 We see pigeons everywhere. Flocks of pigeons flying high together or hundreds of pigeons pecking at seeds in tourist spots are a rather common sight across the world. But have you ever wondered why you rarely see baby pigeons? How strange is it that, given a large number of pigeons you see every day, you hardly ever see a baby?

“Squabs,” as baby pigeons are called, are so rarely seen that there is a rumor that they aren’t real. There are even conspiracy theories around them, the most common one being that pigeons are government spies, and hence there are no babies.

But it turns out that pigeons’ babies are, in fact, real, like any other bird.  There is a perfect explanation for their rarity. Most baby pigeons don’t leave their nests until they are “fledged” – almost fully feathered and can fly. Pigeon babies don’t fledge until they are about four to six weeks old, which is almost twice the length of time for most other garden birds. Therefore, by the time they are ready to leave their nests, they look like adult pigeons. It becomes difficult to spot them among the rest of their grown-up relatives.

Therefore, you may have seen baby pigeons more times than you know. You simply didn’t recognize them as juveniles because they are almost the size of their parents, and already look like them!

Baby pigeons live with their parents longer than most birds

Another reason is that baby pigeons don’t fly very well. Other birds usually leave their nests sooner. Sometimes, they can even barely fly when they leave their homes or are pushed out of their nests. But these baby birds manage themselves well by hopping around until they can fly well independently. But not baby pigeons and a few other birds like barn swallows, swifts, or hawks. They don’t leave the comfort of their homes until they have developed good flying skills.

Another factor that perhaps play the most important role in helping them maintain their elusiveness is the fact that pigeons are, in reality, very secretive birds. They go out of their way to keep their nests away from prying eyes. Pigeon nests are always built up very high, out of the view of humans and other predators. Wild pigeons build their homes on cliffs and high rocks, whereas their city relatives look for window ledges, rooftops, scaffoldings, high rises, or bridges. Because we don’t see their nests most of the time, we don’t see the nest dwellers either.

Pigeon nest on a wooden framework

Pigeons require a flat, covered surface for their nests, unlike other birds. Therefore, all pigeons build their nests in a place where there is a smooth surface for the nest to sit on. Sometimes they even recycle old nests and build new ones. This results in a nest that is a few feet wide. So, even if occasionally a baby falls off, they would still be on a surface and out of our sight.

Baby pigeons are spoilt by their parents

Baby pigeon in a nest.

Baby pigeons are spoiled birds! They are a rare breed where the babies are raised by both mother and the father, and they are pretty good at their parenting skills. They both fiercely protect their young and keep them in the comfort of their homes for a long time. These babies rarely make an appearance in the outside world. And even if they did, they would already look like an adult.

How do you recognize a baby pigeon?

Here is a way you can recognize them if you happen to come across one. Look for really dark eyes because an adult bird would always have red-orange eyes. Also, the fleshy, bulbous growth called “cere” that we usually see above the beaks of adult pigeons is always white in color. If you spot a juvenile pigeon, the color will be more pinkish-grey. Young pigeons also do not have the shimmery, purplish-green yoke around their neck like adult pigeons.

In short, it turns out that the lack of baby pigeons is not such a curious phenomenon after all. Maybe because they are so common, large, and always around us, the absence of their babies becomes more visible.

So, now that you know where to find these babies and what to look out for, do you think you can spot one soon? Or, if you are one of those rare humans who have seen the “mythical” squab, let us know in the comments below.

Until then, we can all be happy with the fact that baby pigeons are in good “hands” with real supportive parents who don’t mind keeping them in the house for as long as they need!