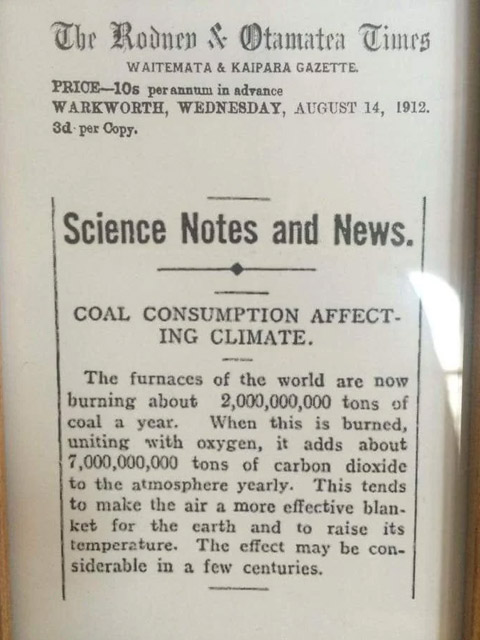 We often think of the battle against climate change as a new phenomenon. But while the scientific understanding of humanity’s effects on the climate is now far greater, warnings about climate change are not decades but hundreds of years old. And now, a 1912 newspaper article’s climate warning that has gone viral online is shedding some light on early concerns regarding the use of fossil fuels.

Did a 1912 newspaper article really warn us about climate change?

A newspaper article titled “Coal Consumption Affecting Climate” has recently been making the rounds on various social media platforms, including Reddit and Twitter. But this newspaper clipping has appeared online before. In fact, its first true “viral moment” came on the 11th of October 2016, when it appeared on the Facebook page “ Sustainable Business Network NZ .”

Understandably, people have cast doubts about this text’s authenticity. But the article is very much real and can be found in several digital archives. It was published in a New Zealand newspaper known as the Rodney and Otamatea Times on the 14th of August 1912. Interestingly, the text in full also appeared as a caption in the magazine Popular Mechanics , four weeks before its inclusion in the newspaper.

The full 1912 newspaper article, as it appears online, reads the following:

“The furnaces of the world are now burning about 2,000,000,000 tons of coal a year. When this is burned, uniting with oxygen, it adds about 7,000,000,000 tons of carbon dioxide to the atmosphere yearly. This tends to make the air a more effective blanket for the earth and to raise its temperature. The effect may be considerable in a few centuries.”

The scientific understanding behind the 1912 newspaper

Much online skepticism regarding this newspaper clipping relates to confusion about how much or how little people knew about greenhouse gasses over a hundred years ago. But the text is consistent with much of what was then the current understanding of the science around climate change.

Indeed, it was a hundred years before the 1912 article, that a French mathematician named Joseph Fourier worked out that, given its distance from the Sun, the Earth should be colder than it is. And from this, he theorized that a blanket-like layer in the planet’s atmosphere trapped heat inside. Later in 1856, American scientist Eunice Foote wrote a paper that identified carbon dioxide as the predominant ingredient of that blanket.

The term “greenhouse gasses” came into use in 1896 when a Swedish scientist named Svante Arrhenius coined the term. In a study he published that same year, he already showed an understanding of how humans could contribute to increased concentrations of certain gases, namely carbon dioxide (then referred to as carbonic acid), in the Earth’s atmosphere. In his later works, he would go on to suggest that this could lead to a warming of the planet.

Arrhenius’s ideas weren’t isolated to the pages of scientific journals either. As the Royal Swedish Academy of Engineering Sciences would state, they “received great public interest” during his lifetime. Though unfortunately, they would fall out of favor for a long while following his death in 1927.

How our understanding of the climate has changed

Of course, it shouldn’t be suggested that people in 1912 understood climate change as well as we do today. For starters, they had neither the tools nor the understanding to measure its effects accurately. That the article states that “the effect may be considerable in a few centuries” is a testament to that. That’s especially when considering the damage that has already occurred.

According to recent findings from an ongoing study conducted by NASA’s Goddard Institute, the Earth’s average global temperature has risen by 1.1 degrees Celsius or 1.9 degrees Fahrenheit since 1880. That might not sound like much, but it’s an unnaturally quick rise and the effects have been devastating.

How the climate itself has changed over the last 110 years

When we think of climate change, we often think about its potential effects on our future. But from the perspective of someone alive in 1912, it would likely seem like climate disaster is something that has already happened.

At the beginning of 2022, research suggested that the global average sea levels had already risen some 8–9 inches (21–24 centimeters) since 1880. And the speed at which they are rising seems only to be accelerating. Indeed, the rate had doubled from 0.06 inches (1.4 millimeters) per year throughout most of the twentieth century to 0.14 inches (3.6 millimeters) per year between 2006–2015. And as a result of these increases, high-tide flooding is now between 300% to 900% more frequent than it was 50 years ago.

Alongside the rising sea levels and temperatures, the environment has also faced a catastrophic loss of biodiversity and horrific pollution levels. So much so that some researchers have determined that almost all the world’s rainwater is too polluted to be drunk by humans without treatment. What’s more, microplastics have been discovered as far afield as the Artic and inside creatures living at the bottom of the ocean.

Earth’s forests have particularly suffered over the last 100 years. Indeed, our planet has lost around a third of all its forests over the last 10,000 years. But astoundingly, around half of all of that deforestation has occurred in the last century alone.

One report in 2019 found that the world is losing an area of forest roughly the size of the UK each year, with at least 24 million hectares of global tree cover being lost annually between 2016-2021. And although some of this tree cover loss is regained through planting and regrowth, roughly a third of all forestry loss is classed as permanent (i.e., used to build human settlements or for agricultural purposes).

Looking toward the next century

Seeing a 1912 newspaper article discussing the climate is undoubtedly fascinating. But it’s crucial to place the article into proper context. While a scientific understanding of climate change was indeed beginning to develop, it was nowhere near what it is today. So, we shouldn’t be too quick to judge. After all, despite scientific improvements, CO2 emissions today remain as high as ever.

With that in mind, we can only wonder what people will think of us in the centuries ahead. Will they look back at today’s headlines and judge our actions as adequate? Or will they wonder why we didn’t do more with our current knowledge? Hopefully, it will be the former.

10 Future Events that Can Wipe Out Humanity from Earth