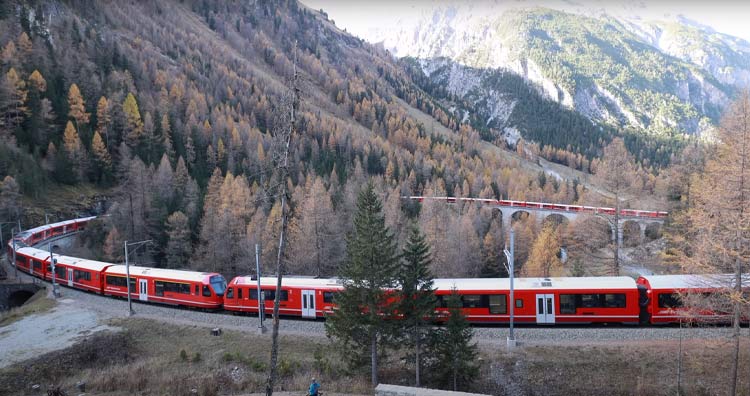 The longest passenger train in the world is now in Switzerland! A 1.2-mile-long train finished a brief journey across the rugged area, breaking the previous record in the process. The effort to break the record was organized by Rhaetian Railway (RhB) as part of the 175th-anniversary celebration of Switzerland’s first railroad. Let’s take a closer look at the record-breaking rail behemoth and its recent journey.

The Train Broke a 30-Year-Old Record

A Swiss railway company, Rhaetian Railway, claimed the Guinness record for the world’s longest passenger train with a journey on one of the most breathtaking tracks through the Alps. The train broke a 30-year-old record of the National Belgian Railway Company that set that standard in 1991. Its 70-car railway traveled 38 miles and spanned 1.1 miles.

The train has 100 carriages, seven drivers, 4,550 seats, a length of 1.2 miles (1.9 km), and weighs 3,295 tons.  On 29 October 2022, the train traversed through Albula/Bernina en route from Preda to Bergün.  The route is a designated UNESCO World Heritage and leads through 22 tunnels across 48 bridges, including the curved Landwasser Viaduct (a 142-meter-long and 65-meter-high, single-track, six-arched curved limestone railway bridge).

Many thousands of visitors and train enthusiasts gathered at the open event in Bergün or set up camp along the aforementioned route to participate in this unusual adventure. The train was filmed by 19 cameras in helicopters and drones, cameras on the train and along the track, and three satellite uplinks, creating a unique record of this once-in-a-lifetime event.

The 100-car Train was constructed using 25 brand-new “Capricorn” electric trains into one 6,266-foot Train, each of which has four carriages. Rhaetian Railway spent months planning the journey, which involved seven drivers and 21 technicians, each monitoring their own sections of the train to ensure they weren’t accelerating or decelerating too quickly. Also, drivers and technicians were in charge of their own emergency braking systems.

The initial test run was unsuccessful because one of the drivers could not deploy the emergency brake. The fact that the train’s enormous length prevented the drivers from effectively talking with one another made the situation even more difficult. In the tunnels, radios and phones would not function.

Due to the regenerative braking of the train, the operators also restricted the train’s speed to a maximum of 21 mph. This is because the train’s regenerative brakes send energy back into the overhead grid as it descends a hill. With a train this large, there was concern that the re-gen may blow fuses in the cars or burn the catenary lines above the tracks.

Why Switzerland Built a Two-Kilometer-Long Train

Switzerland is a railway country like no other. The Swiss are the most avid rail travelers worldwide, covering an average of 2,450 km by train annually, or 25% of their yearly mileage. Switzerland is a small nation with a mountainous topography that initially seemed unsuitable for railroads, but it excels in the field.

Switzerland has long been a pioneer in civil, mechanical, and electrical engineering, and its technology and knowledge are exported to other countries. The Albula Line is well known for its seemingly endless sweeping turns and precipitous descents. It is acclaimed as a global masterpiece of civil engineering.

In Switzerland, public transit users have such high expectations that a slight delay results in quiet displeasure. In light of this, the Rhaetian’s extraordinary accomplishment of the Swiss rail is a profoundly impressive evidence of Switzerland’s state-of-the-art capabilities in railway technology.