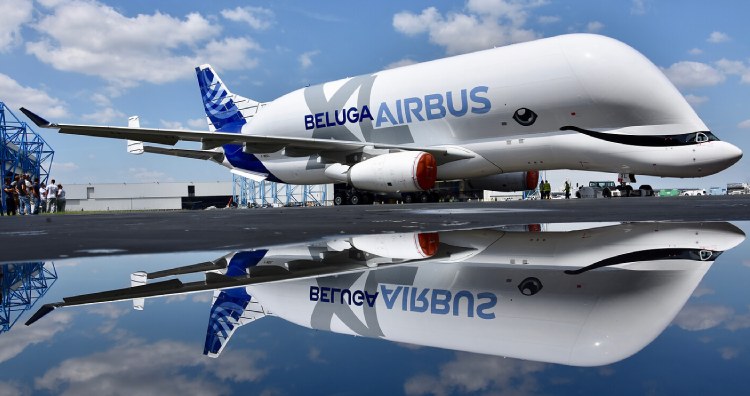 Is it a whale or an airplane? As it turns out, Airbus’ BelugaXL is both! Designed to look like a giant beluga whale, this aircraft has been turning heads since the day of its inception. But how much do we really know about this adorable “flying whale”? Let’s find out!

What is the Airbus BelugaXL?

The BelugaXL is a large transport aircraft based on Airbus’ own A330-200F. It was built to move oversized airplane parts around and is powered by Rolls Royce Trent 700 engines.

Given its extraordinary appearance, it’s no surprise that this airplane is one of the most well-known ones today. However, the Airbus BelugaXL is not exactly the first of its kind. This is because it was built to replace the Airbus Beluga, an aircraft similar in appearance that began operation in the 1990s.

How was it developed?

Airbus, having originated as a pan-European consortium of aerospace companies, has production centers across the continent. Each of these centers specializes in building individual aircraft sections that are then put together at a final assembly location.

Initially, Airbus used another unusual-looking airplane called the Super Guppy to transport airliner parts. This aircraft was a highly modified 1940s-era Boeing Stratocruiser that soon proved incapable of keeping up with the company’s increasing production rates. As a result, Airbus decided to look for a replacement, and in the 1990s, the original Beluga aircraft was put to work.

However, despite the Airbus Beluga having some 47 tons of payload capacity, it became evident by 2013 that even this aircraft would need a step-up. As a result, the Airbus BelugaXL was born that is not only more efficient but also cuter than its predecessor!

The unique design of the BelugaXL

No doubt, the BelugaXL is one of the most fascinating planes to ever roam the skies. But what is it that makes it so unique? Let’s have a look. The newer BelugaXL is derived from the A330-200, which is both larger and more powerful. As a result, it is about six meters longer, one meter wider, and boasts a payload-lifting capacity six tons greater than its predecessor. This then means that the BelugaXL can carry two A350 jetliner wings as opposed to only one in the original Beluga.

Certainly, based on these specifications alone, this aircraft deserves a spot in the airplane hall of fame. However, there’s another reason why it currently holds that place. This, of course, is the beluga whale-inspired eyes and smile that it so proudly wears. But make no mistake, this design was no coincidence! The “Smiling BelugaXL” entry was actively chosen by Airbus employees in a poll where 40% or more voted for it.

Why has it been generating some buzz lately?

Just about two years ago, in January 2020, the much-anticipated Airbus BelugaXL entered full-time service by making its first operational flight. Since then, it has become a hotly discussed topic among airplane enthusiasts and animal lovers alike. In fact, according to the head of the BelugaXL program, Bertrand George, even kids have come to love and recognize this very special plane!

However, this is only one part of the buzz this aircraft has been generating. As it turns out, Airbus now intends to charter its Beluga planes, whose main job so far has been to fly around aircraft parts, to help other industries move their oversized cargo. This could then pave the way for more such examples of aerospace “in-sourcing.”

Unfortunately for its admirers, the Airbus BelugaXL is not meant to carry passengers. Nevertheless, it will still leave a mark on many of our lives with the crucial role it plays in the manufacturing of commercial airplanes.

Source: https://unbelievable-facts.com/2022/06/the-airbus-belugaxl.html
We use cookies to ensure that we give you the best experience on our website. If you continue to use this site we will assume that you are happy with it. Ok
check out this page