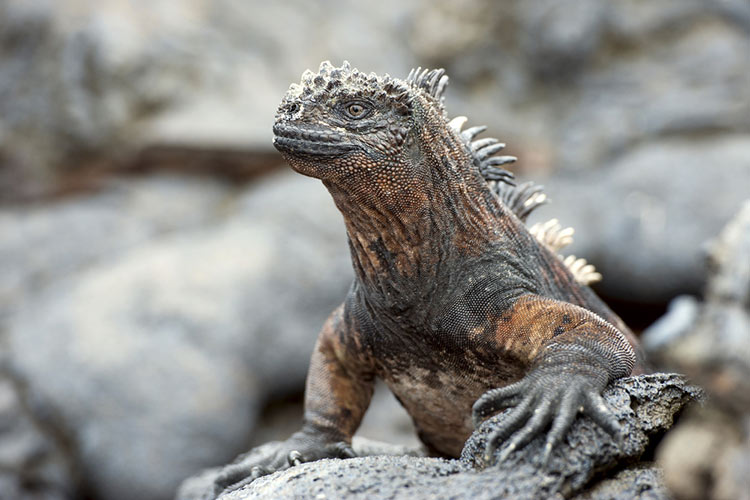 The marine iguanas of the Galapagos Islands are the only ocean-swimming lizards in the world. And if you ever happen to swim alongside these creatures, you will notice how menacingly similar to Godzilla they look. They are strong swimmers, and with one single breath, they can dive as deep as 98 feet under the sea and spend up to an hour underwater.

Why are Marine Iguanas considered an inspiration for Godzilla?

Their mini-dragon-like features include a row of spines extending from the nape of their neck, all along their backs to the tails. The scales on top of their heads are conical and pointed, and they have short robust limbs and stocky bodies. Their lengths typically range from 4.7 to 22 inches, and they weigh a maximum of 26 lbs. Their size largely depends on the amount of food available on the island.

Marine iguanas are gentle herbivores, who feed on the green and red algae found in the waters of the Galapagos. Large males dive into the sea to feed on the algae growing on rocks on the sea floor. However, females and young males take lesser risks and mainly feed on algae available on rocks exposed during tidal changes.

On the island, food is scarce, and their only source sometimes becomes the underwater ocean algae and seaweed. Their dependency on the water also makes them very vulnerable to the changes caused by the El Niño-Southern Oscillation (ENSO), which brings warmer waters to the Galapagos. This in turn leads to the disappearance of the red and green algae that these creatures survive on. This often causes them to die of starvation with the larger iguanas most at risk. To fight this, they do the unthinkable. They shrink in size and length, just to survive. Scientists speculate that their bones shorten by 20% and that they reabsorb their own bone matter. Once the water starts cooling, their bodies start to grow again!

One interesting feature of marine iguanas is the specially adapted glands that clean the extra salt that they intake while in the ocean. They regularly “sneeze” salt from their nostrils and get rid of the salt from their bodies. This salt often lands on their heads, resulting in white deposits.

They vary in appearance between different islands. Though black for most of the year, the males change colors during the mating season with each subspecies adapting different colors. On Santa Cruz Island, they turn red and black, whereas, on the islands of Española and Floreana, they become bright red and green, and are aptly called “Christmas iguanas.” Their colors come from pigmentation digested from ingesting ocean algae.

The Iguanas and the lava lizards have a mutualistic relationship.

On the rocky shores, marine iguanas have a mutualistic relationship with the lava lizards who scamper over them to hunt flies. The iguanas let them be and rely on them to get rid of the flies. The lava lizards get their food, and the lizards can bask peacefully in the sun.

They are considered vulnerable and are protected in Ecuador. Predators introduced on the islands, like feral cats and dogs, and natural land predators, like racer snakes, feed on their eggs and babies. In spite of their amazing adaptability, their anti-predatory strategies are still not that developed.

So, if you happen to visit the Galapagos National Park anytime soon, be careful not to disturb the marine iguanas and go too near. They may be fierce to look at, but in reality, they will be scared of you.