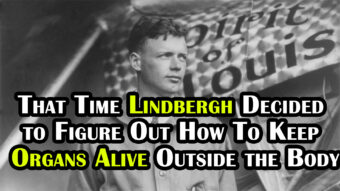 History is a curious thing. While an individual may accomplish many things in their lifetime, human memory only seems capable of retaining one feat per person. Very rarely will someone be widely remembered for two separate things. Charles Augustus Lindbergh was one of those rare people. On May 20, 1927, the then 25-year-old air mail pilot flew his custom Ryan NYP aircraft Spirit of St. Louis from New York to Paris in 33-1/2 hours, becoming the first person to fly the Atlantic solo. While this feat alone was enough to cement “Lucky Lindy’s” place in the history books, only five years later he would enter them again when his 20-month-son was kidnapped and murdered in one of the most infamous crimes of the 20th Century. Given this double claim to fame, it is perhaps unsurprising that many aspects of Charles Lindbergh’s life remain relatively unknown, including a curious five-year period in which the famous aviator devoted himself to the advancement of medical science.

In 1930, Elizabeth Morrow, the eldest sister of Lindbergh’s wife Ann, was diagnosed with severe heart disease following a bout of rheumatic fever. When Lindbergh inquired about corrective surgery, Elizabeth’s doctors informed him that any such procedure would take longer than her heart could be kept alive outside her body. Alarmed at the doctors’ lack of interest in what he saw as a solvable technical problem, Lindbergh contacted anesthetist Paluel Flagg, who referred him to pioneering surgeon Alexis Carrel at the Rockefeller Institute in New York.

Born in France, Carrel had won the Nobel Prize in Physiology and Medicine in 1912 for developing new techniques for suturing blood vessels. Meticulous and eccentric, Carrel was infamous for wearing black robes in the operating theatre so stray reflections would not interfere with his eyesight and for practicing his delicate suturing techniques by sewing together cigarette papers. After publishing an account of a miraculous cure he supposedly witnessed at the Cathedral of Lourdes, Carrel lost credibility with the French medical establishment and moved to the United States in 1906.

Lindbergh and Carrel met for the first time on November 28, 1930 at the Rockefeller Institute. Lindbergh was particularly struck by the elder surgeon, later declaring he was “The most stimulating mind I have ever met.” In turn, Carrel declared that not only was Lindbergh “…very intelligent, but, what is very important in achieving success, he is also very obstinate and tenacious, so that he does not admit defeat.” During the meeting, Carrel showed Lindbergh unsuccessful prototypes of a device he was developing to keep organs alive outside the body by perfusing them with an oxygenated, nutrient-rich fluid. Carrel had perfected the formula for the perfusion fluid, but was having difficulty keeping the pump free of bacterial contamination. Inspired, Lindbergh set about designing an improved version of Carrel’s pump. Two weeks later he returned with a prototype crafted by a Princeton University glassblower, which, powered only by compressed air, continuously oxygenated and circulated perfusion fluid through a chamber containing the preserved organ. Bacterial contamination was prevented through the use of sterile cotton plugs. Impressed, Carrel offered Lindbergh space in his lab to further pursue his research.

Over the next four years, Lindbergh devoted nearly all the time he could spare from his aviation duties to perfecting the perfusion pump, conducting over 1000 experiments on various animal organs. Fearing his celebrity would interfere with his research, Lindbergh reached an agreement with the Rockefeller Institute staff to never mention him by name, and always entered and exited the building via a little used side door. Even his article in the May 1931 edition of Science detailing his preliminary results was the only one in the journal’s history to be published anonymously. Inevitably, however, news of Lindbergh’s research leaked. The press had a field day with the story, certain articles claiming Lindbergh was working with human embryos or planned to replace his own heart with an artificial one. To escape the media frenzy Charles and Ann fled to the French island of Illiec, near Alexis Carrel’s home on Ile St. Gildas.

Lindbergh and Carrel’s research came to a head on April 5, 1935 when they performed a public demonstration of the perfected pump, successfully perfusing a dog thyroid for 18 consecutive days. The pair appeared on the July 1935 cover of Time Magazine, prompting a colleague of Lindbergh’s to declare to the New York Times: “The name he will leave in that science will be as illustrious as that in aviation.”

But it was not to be. While a continuously-perfused dog thyroid was prominently displayed at the 1939 New York World’s Fair, by this time the concept of perfusing organs outside the body had fallen out of favour, and Lindbergh’s role in the history of medicine was quickly forgotten. But his five years of effort would not be in vain. The advances made by Lindbergh and Carrel would prove instrumental in the later development of the cardiopulmonary bypass or heart-lung machine, which pumps out, oxygenates, and replaces a patient’s blood. Starting in the early 1950s, this technology would finally make it possible for surgeons to perform open-heart surgery and even heart transplants – just as Lindbergh had envisioned.

While Lindbergh’s contributions to medicine certainly deserve to be better-known, it is perhaps fortunate for his legacy that today he is still mainly remembered for his Atlantic flight and his son’s kidnapping. For in the course of his collaboration with Alexis Carrel he absorbed not only the doctor’s medical philosophy but also many of his views on Eugenics, antisemitism, and politics. In 1935, Carrel published Man, the Unknown, a treatise in which he advocated selective breeding, forced sterilization, and the euthanasia of criminals and other “defectives” as means of improving society. Following the capitulation of France to the Nazis in 1940, Carrel co-founded the French Foundation for the Study of Human Problems and helped the collaborationist Vichy regime implement eugenics policies. He was suspended by the Minister of Health following the liberation of Paris in August 1944, but died of a heart attack in November before he could be arrested or tried.

Meanwhile, throughout the 1930s Charles Lindbergh grew more and more enamoured of Hitler and the Nazis, even travelling to Germany in 1936 to evaluate the Luftwaffe and attend the Berlin Olympics as a special guest of Hermann Goering, who in 1938 awarded him with the Commander Cross of the Order of the German Eagle. As the threat of war in Europe began to loom, Lindbergh took a hard isolationist stance, joining the executive of the America First Committee in an effort to keep the United States out of the conflict. In a speech delivered on September 11, 1941 in Des Moines, Iowa, he laid out his philosophy: “The three most important groups who have been pressing this country toward war are the British, the Jewish and the Roosevelt Administration…Instead of agitating for war, Jews in this country should be opposing it in every way, for they will be the first to feel its consequences. Their greatest danger to this country lies in their large ownership and influence in our motion pictures, our press, our radio and our government.”

As a result of these activities, Lindbergh’s public reputation was severely tarnished, such that President Roosevelt even forbade him from re-enlisting in the Air Force, stating:“You can’t have an officer leading men who thinks we’re licked before we start.”

While he did eventually make it into combat, teaching pilots in the Pacific fuel-conservation techniques and scoring one aerial victory, it would be many decades before the name Charles Lindbergh would again be associated with heroism.

Another unlikely figure who contributed to medical science was British writer Roald Dahl, author of such beloved children’s books as Charlie and the Chocolate Factory, Matilda, and The BFG. Like Lindbergh, Roald Dahl’s foray into medical innovation was sparked by personal tragedy, when in 1960 his 3-month-old son Theo was struck in his pram by a taxicab in New York City. This injury lead to cerebral haemorrhage and a buildup of cerebrospinal fluid in the skull, prompting Theo’s doctors to fit him with a standard Holter Shunt – a short length of tube with a one-way valve to drain off the excess fluid.

Unfortunately, the shunt proved unreliable, its valve constantly becoming clogged with blood clots and other debris. This caused Theo bouts of extreme pain and blindness, and required frequent surgical interventions to correct. With Theo back in England and under the care of neurosurgeon Kenneth Till, Dahl contacted hydraulic engineer Stanley Wade – a friend from his hobby of flying model aircraft – to help solve the problem. Together, Wade and Till – with Dahl acting as liaison – developed an entirely new type of cerebral shunt using spring-loaded disc valves, which was far less prone to clogging than the Holter shunt. The Wade-Dahl-Till valve was granted US Patent #3233610 in 1962, its inventors agreeing never to derive any profit from the invention. Although by this time Theo had recovered and no longer needed it, the device is estimated to have helped some 3000 children before being replaced by more advanced models.

Source: http://www.todayifoundout.com/index.php/2022/07/lucky-lindy-and-advancing-medical-science/
We use cookies to ensure that we give you the best experience on our website. If you continue to use this site we will assume that you are happy with it. Ok
check out this page