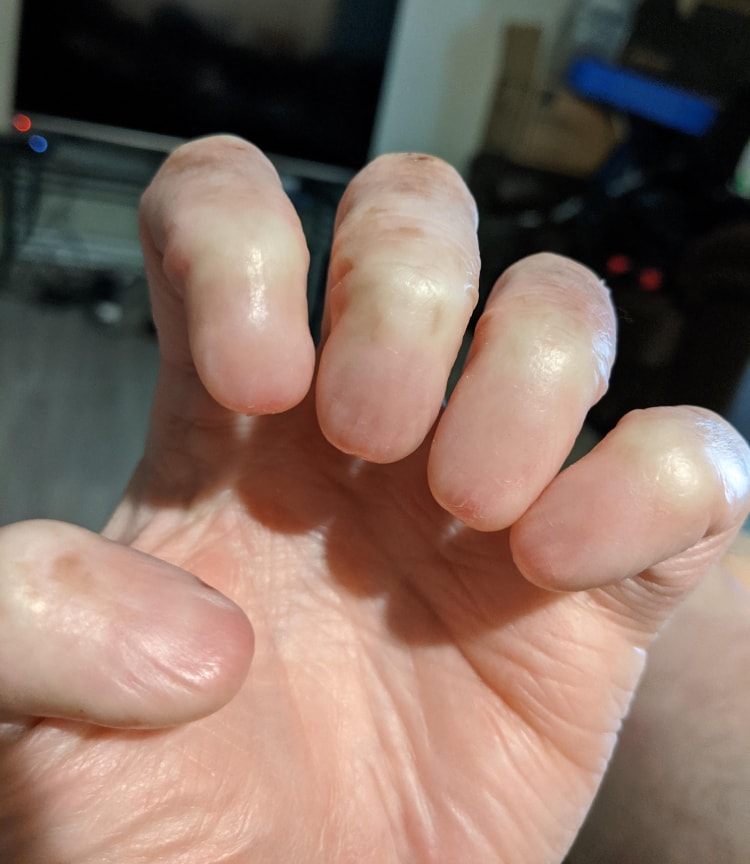 The human body is fascinating. Every cell in our body serves its purpose so that all the organs function properly to keep us alive and healthy. Despite having its strengths, the human body is also quite fragile, and it is susceptible to diseases and disorders, some of which are extremely rare and mysterious. One such rare condition is anonychia, which refers to the complete or partial absence of fingernails and/or toenails. Those affected with this condition may look like they are wearing latex gloves.

Anonychia is the partial or complete absence of fingernails and/or toenails. It is a rare anomaly that can be either congenital or acquired.

If you're wondering what's up with my toes, its called anonychia congenita! #weirdfeet #feet #toes pic.twitter.com/nHxTYB739o

The complete or partial absence of fingernails and/or toenails is called “anonychia.” This rare anomaly can be caused by a congenital ectodermal defect, but it can also be acquired due to other disorders and conditions such as ichthyosis, self-inflicted trauma, severe infection, severe allergic contact dermatitis, lichen planus, Raynaud phenomenon, severe exfoliative diseases, or epidermolysis bullosa.

Anonychia congenita, or the congenital absence of fingernails and toenails involving multiple digits is extremely rare. The condition occurs at birth, and individuals who suffer from this condition are typically missing most (if not all) of their toenails and fingernails. In certain cases of congenital anonychia, only part of the nails may be missing, and it is called “hyponychia.”

Even when the nail is missing, the surrounding tissues, as well as the structures that typically support the nail and nail growth, tend to be normal. Those with anonychia congenita typically do not experience any other symptoms or health problems related to this condition.

The primary cause of anonychia congenita is a mutation in the RSPO4 gene.

Congenital anonychia occurs as a result of mutations in the RSPO4 gene, which provides the instructions for creating a specific protein called R-spondin-4. This protein plays a crucial role in the Wnt-signaling pathway, which involves several steps that affect and determine the tissues and cells develop. Wnt signaling is also important in various cellular activities such as cell division, cell movement or migration, cell adhesion (attachment of one cell to another), and many others.

During the early stages of development, Wnt signaling plays a crucial role in the development and growth of nails. R-spondin-4, which is active in the skeleton, contributes to the formation of limbs, specifically the ends of the toes and fingers where nails grow. Mutations in the RSPO4 gene cause the production of a protein that serves little to no function, which is why R-spondin-4 fails to participate in the Wnt-signaling pathway. That causes nails to develop improperly or not develop at all.

Anonychia congenita, which occurs as a result of RSPO4 gene mutations, is inherited. Understanding inheritance patterns help us understand the condition better.

We typically do not find any history of autosomal recessive conditions within a single family, mainly because when someone is a carrier of one or more of these conditions, they would need to produce a child with someone who is also a carrier. Since autosomal recessive conditions tend to be fairly rare, the chances of both partners carrying the same recessive gene are usually low. Furthermore, even when both partners are carriers, there is only a 25% chance that they will pass it down to their baby.

Other unusual diseases and disorders that you may have never heard of!

1 Aquagenic urticaria is a rare condition that causes sufferers to be extremely allergic to water.

Aquagenic urticaria refers to a rare condition in which urticaria (a type of hives) develop rapidly when the skin comes in contact with water. Even snow, rain, tears, and sweat can set this allergic reaction off. This form of physical hives is associated with burning and itching. Although there is limited research on this condition, we know that it is a form of water allergy that mostly affects women. The exact cause of aquagenic urticaria is still unknown. (1, 2)

Fibrodysplasia ossificans progressiva, an extremely rare connective tissue disease, causes muscle tissue as well as connective tissue such as ligaments and tendons to be gradually ossified (turned into bones). This disorder causes bones to form outside of the skeleton, leading to constrained movement.

The disorder typically starts showing symptoms in early childhood, and those affected by this experience loss of mobility. Over time, they may experience breathing difficulties, malnutrition, and a range of other health problems.

Those affected by this disorder cannot undergo any invasive medical procedure to remove the bone growth as it would worsen the condition and cause more bones to grow. (1, 2)

Alice in Wonderland syndrome is a rare neuropsychological disorder that causes episodes of distorted perception along with disorientation. Those who suffer from this condition may feel smaller or larger than they actually are. They may also find the room they are in or the surrounding furniture to shift or feel closer or further away than it really is.

These distortions are not the results of hallucinations or problems with the eyes. They are caused because the brain of the sufferer cannot accurately perceive the environment they are in or how their body looks. (1, 2)

4 “Porphyria” refers to a group of disorders that cause severe sun sensitivity, red or brown urine, seizures, muscle weakness, or paralysis among many other symptoms.

5 Auto-brewery syndrome, also known as “gut fermentation syndrome,” is a condition that makes sufferers drunk or intoxicated even without drinking alcohol.

Auto brewery syndrome, sometimes called “drunkness disease,” is characterized by the fermentation of carbohydrates in the gastrointestinal tract. It is a rare medical condition that causes people to become “drunk” even when they have not had a sip of alcohol. That is because this condition turns starchy and sugary foods into alcohol using fungi or bacteria.

The condition is difficult to diagnose, and it is easy to mistake it for various other conditions. There have only been a few reported cases of auto-brewery syndrome in the last few decades. (1, 2)